The smartphone market is certainly not going through a single crushing positive moment Economic and geopolitical crisis Which may also hurt its performance in the coming quarters. numbers Third Quarter 2022 Speaking for themselves, globally, there is a 9 percentage point contraction (Data Canalys) confirming the suffering that began right after the peak of the epidemic.

However, when analyzing the market on a regional scale, there are particularly interesting elements that show how the sector despite everything is in development: above all Xiaomi’s gradual growthable to undermine Apple from second place in Italy for the number of smartphones shipped and asserts itself behind only Samsung in Europe. Both in our country and at the continental level, the Asian producer reported one report in the third quarter 5 percentage point growth.

The gap in terms of market share that Xiaomi has been able to build with the Cupertino company in Italy is significant: 26% first, 13% second. In Europe, it is less clear, but it is still on the rise since +5% of the Chinese company is matched by -13% of Apple. Availability of the public image Samsung is still in first place With a share of 34% in Italy and 29% in Europe, but with the behavior of the last year of the opposite signal at the national and continental level: + 13% And the -15th% Straight. 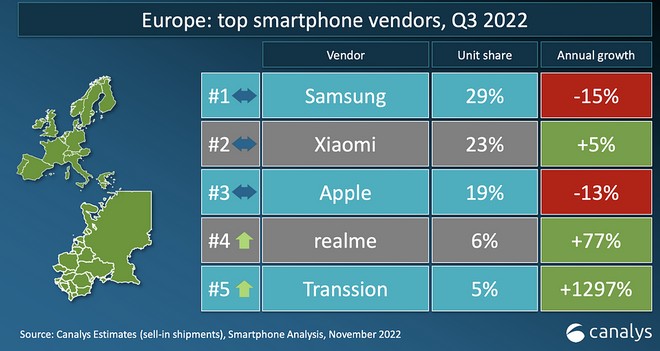 In our country sees ranking Oppo is in fourth place Share of 9% and down 30% year-on-year e TCL to V With a market share of 6% compared to a growth of 93%. In Europe, the top three (Samsung, Xiaomi and Apple) do not change but are gaining positions real me And the Transsiona Chinese company that brands such as Itel and Infinix refer to.

Antitrust in the European Union: this is why it is considering the acquisition of Activision-Blizzard