If last July Xiaomi 12S Ultra surprised us (here is our experience of use) with it 1 inch sensor And with optics made in collaboration with Leica, with whom it partnered last May, know that the Chinese company is working on something even more ambitious and exotic.

In the past few hours, Lei Jun, CEO of Xiaomi, presented in a video the new Xiaomi 12S Ultra Concept phone, a true “camera phone” that incorporates the aesthetic lines of the 12S Ultra but adds a unique feature which is the ability to connect to the rear image module Leica M lens. Turn it into a real mirror.

The 12S Ultra Concept Phone, unlike the 12S Ultra, It is equipped with a one-inch sensor: one used in a classic way, placed on either side of the circular rear unit, the other placed in the middle, instead of the original with an ultra-wide angle lens (which in turn went to take the place of the periscope), without a lens but Protected by a sapphire crystal panel.

The circular unit has a ring that must be removed and replaced with an adapter that then allows you to attach a classic Leica M. lens. The images show the concept using a Leica Summilux-M 35mm f/1.4 ASPH.

In its mirrorless configuration, of course, the Xiaomi 12S Ultra Concept won’t be the ultimate in comfort, with a decidedly unbalanced weight forward, but it’s still interesting to see how the smartphone can now be easily converted to the high camera range. It hasn’t been officially confirmed but it’s safe to believe that both the 1″ sensors are Sony IMX989 with 10-bit RAW support. 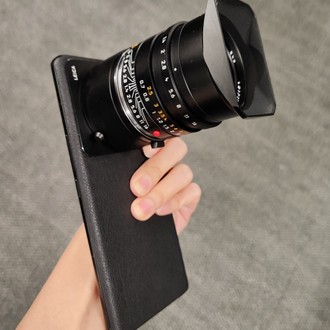 Xiaomi hasn’t said if the 12S Ultra Concept Phone will start production or whether it will still be just a “stylish exercise”. According to what has been reported, the Chinese company will have some Make 10 units only It has been sent for a few weeks to some influencers who will certainly have to be very careful: each unit, in fact, will have The production cost is about 300,000 yuan, more than 41,000 euros at the current exchange rate.