The Juno spacecraft, which gave its name to the mission to explore the gas giant Jupiter and is currently the champion, has concluded a few hours before a close flyby of one of Jupiter’s most interesting moons, not just among Jupiter’s moons. itself but for the entire solar system.

The probe managed to get close Only 358 km from the frozen surface of Europe And all this happened only this morning, When we were 11.36. This means that very soon we will be able to see more detailed images of its shell, which is unique thanks to the narrow distance and abundance of details.

But the solar-powered spacecraft was not limited to simple flybys for photographic purposes, it had a main goal, which was to collect important data on its deep geology, surface and ionosphere composition, as well as new information about its interaction with Jupiter’s magnetosphere.

All the data collected will be essential to the success of future missions, including the most important of which is the Europa Clipper, which we have talked about several times and which according to current forecasts should be launched in 2024 with the express goal of studying the moon in depth. frozen.

Here are the spirited words of the Juno mission principal investigator, Scott Bolton, of the Southwest Research Institute in San Antonio.

“Europe is an interesting Jovian moon, it is the focus of a future NASA mission. We are pleased to provide data that can help the Europa Clipper team in mission planning, as well as provide new scientific insights into this frozen world.”

We have repeatedly emphasized the importance of this and many other moons of the solar system, but it is worth refreshing our memory of some of the features of Europa. With an equatorial diameter of about 3,100 kilometers, the Jovian Moon is slightly less than the size of our Moon, the moon that orbits the Earth. However, they are so different in terms of geology, that they suggest that life may be hiding in their concavities. Because?

At the moment, we know for certain that the average surface temperatures of Europa are around -220 degrees Celsius, while its weak atmosphere consists mainly of oxygen. Numerous theories undoubtedly contributed to the start of Many surface lines which may have formed as a result of geological activities in the past.

Scientists speculate that A salty ocean lying under an ice crust several kilometers thickAnd with Jupiter’s molten iron core and magnetosphere, temperatures can be much milder on the outside. In essence, we could find ourselves dealing with some kind of broth with everything needed to create the best conditions for the birth of organisms, perhaps only unicellular, but if the affirmations arrived, we would face the discovery of the century.

To reach this morning’s approach, it was necessary to proceed with the modification of the Juno spacecraft’s trajectory, to reduce the time required to orbit Jupiter, which passed from 43 to 38 days. But it wasn’t the most daring close pass ever, the record still belongs to NASA’s Galileo spacecraft, which on January 3, 2000 reached just 351 kilometers from its surface. Furthermore, this flyby was actually the second encounter with a Galilean moon during its extended mission. The mission has already approached another moon, Ganymede, in June 2021 and plans to approach Io in 2023 and again in 2024.

As far as we know, data collection began an hour before the approach, when the spacecraft was 83,397 kilometers from Europe. Juno passed very fast by the moon, speeding at nearly 24 km/s To head immediately towards a new approach to Jupiter, which will materialize tonight around the 19th according to our time zone.

But the most interesting appointment will be with NASA’s Twitch page (at SOURCE) tomorrow evening, where the space agency will share the first close-up images of Europa’s surface during a live broadcast. The appointment will start at 6pm according to our time zone, so set a reminder for yourself if that might interest you. Otherwise, no problem, we will update you as always on all news and communications from NASA and show you the shared photos.

Update: NASA stocks are close to the image of Europe 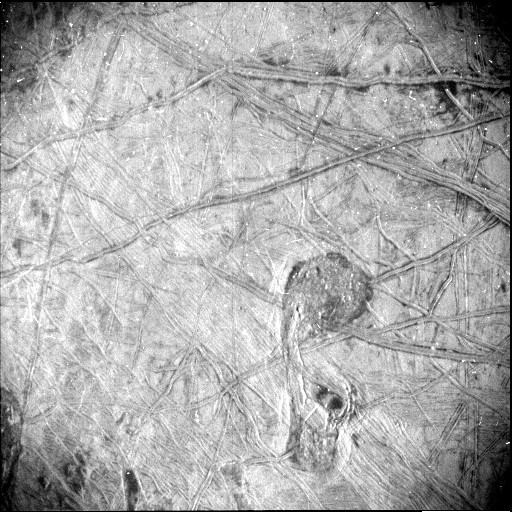 The close transit of Europa has allowed NASA to collect incredibly accurate data and images of the surface that had hitherto not been seen in such detail. Now we finally have itThe highest resolution image ever captured by NASA’s Juno mission A specific part of Jupiter’s moon Europa, which reveals details of a region of the icy crust where fractures are particularly visible.

The image covers an area of ​​about 150 by 200 km and reveals a network of thin canyons and double ridges across most of the region. As you can see there are white spots in the image: they are signs of penetration of high-energy particles coming from the strong radiation environment around the Moon.

Juno’s Stellar Reference Unit (SRU), an engineering camera used to guide a spacecraft, acquired the black-and-white image as the spacecraft flew over Europa on September 29, 2022, when it was at a distance of 412 kilometers. So we can confirm that it was not captured at the moment of maximum approach, which we remember occurred about 352 km from the surface of Europa. with a decision that Varies from 256 to 340 meters per pixel It’s the most specific shot we have. Here are the words of Heidi Becker, SRU’s co-principal investigator.

This image unlocks an amazing level of detail in an area that has never been photographed with this resolution and under these floodlighting conditions. The team’s use of the stargazing camera for science is a prime example of Juno’s revolutionary capabilities. These features are very interesting. Understanding how it formed – and how it relates to Europe’s history – tells us about the internal and external processes that make up the ice crust.

The photo was taken with Juno’s passing At a speed of about 24 kilometers per second On a poorly lit part of the surface, which is why it’s even more incredible given the extravagant conditions. The image is available above.

NASA made an unexpected gift by sharing First image related to Europa fly-by By the Juno spacecraft, the process which, as we told you, took place yesterday when we were at 11.36 am. The image, which you can see below, reveals a file surface properties In an area close to the lunar equator, it is called Anun Regio.

Due to the greater contrast between light and shadow encountered by the probe on the boundary separating the night side from the day side, terrain features are particularly visible, including higher formations whose shadows appear sharp, as well as ridges, depressions and famous surface streaks.

Looking closely to the left, near the shadow area, a geometrically perfect strip length is clearly visible. According to the first hypotheses, it could be a very old impact crater. Tonight’s appointment is at 6 p.m. with all the news that NASA will be sharing on Twitch.