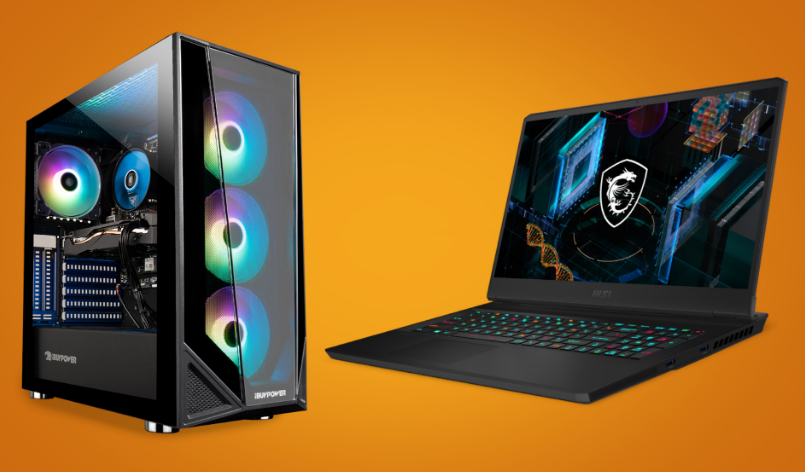 In these times, it is easier to get a gaming laptop than not trying to build a traditional desktop tower to play. Seems like a more reasonable option for the price due to stock issues.

Then the question occurs to me: should I buy a gaming laptop or go for the traditional desktop tower?

PC vs gaming laptop, which is better?

Gaming laptops have improved a lot in recent years, mounting the latest components in both processors and graphics cards, putting in high refresh rate panels of more than 144 hertz .

Even at the top of the range there are 360 ​​hertz panels and all of them on screens with resolutions of 1080p and higher, with some options with 2k and 4k.

All these features are better each generation, accompanied by better designs in laptops , both in aesthetics and utility. Laptops are getting thinner and better ventilated.

As we have already discussed, with many computer components out of stock, it seems like a good time to buy a laptop.

Many will think that why do we want a gaming laptop if in most cases, for the same money or even less, we can build a tower that will be better than a laptop.

PC towers tend to be more powerful in all respects, make less noise, run cooler, and are very flexible in terms of changing components to improve them over time.

Therefore, they are usually a much better option in terms of quality price. And not only that, normally the same component on a laptop and on a desktop is different.

Let’s say that a desktop RTX 3070 is not the same as a laptop RTX 3070 , since they must work at lower consumption, because simply if not, a laptop would be unable both to cool that component and to supply the electricity it needs,

This is because most gaming laptops have power supplies with a maximum of 200 or 300 watts.

How to know the real power of a gaming laptop compared to a PC tower?

And this is getting more and more complicated since before to tell you that an element had a lower consumption (come on, it was a laptop version) I put the suffix maxcube behind the name of the graphics card , and that way you knew that it was a version with lower voltage and less powerful .

But with the arrival of the RTX 3000 this has changed again, and now NVIDIA does not force manufacturers to say if a graphics card is less powerful on a laptop .

So each laptop is different and you have to study each case to know how much power they are allowing to pass to the graphics card to know how it performs.

There are even cases of some RTX 3060 laptops outperforming others with an RTX 3080 . And we can distinguish this because some manufacturers put the power that they pass to the card, usually in the specifications next to the clock frequency.

But not all of them do, so it is highly recommended that if you are looking for a specific laptop, you inform yourself about your specific model, or look for a review of that model.

This is ultimately a bad move on NVIDIA ‘s part as it complicates the choice and can confuse buyers . If deciding on a laptop model is already difficult, imagine if we then have to find out all this, since it is something that we do not have to think about on desktop computers.

What to choose? Gaming laptop or PC?

Virtually all are reasons not to buy a gaming laptop and go for a desktop tower. Since being a specifically designed model, we will end up paying more for laptops in order to cover the expenses of the brand in the development of that specific product.

In addition, including that we are not only buying the components but, of course, a laptop already incorporates a keyboard, mouse, screen, battery, and speakers.

As for desktop towers, it is true that we could consider that the choice of components can also be a confusing and somewhat tedious process . Including the assembly itself, and dealing with all the components and problems that may arise.

But in this aspect, for those who want to avoid all this, we also find desktop computers already assembled and delivered, ready to use by brands with a very insignificant premium.

So we can’t really consider these aspects as negative. In any case, they would be positive since in the end for many of us, after doing all this, we end up learning and becoming passionate about this world.

What is certain is that, in these times of little stock that we live in, it is cheaper to buy a laptop or a tower already pre-assembled by a brand, than not trying to assemble it ourselves.

It will be much cheaper, since for us as individuals, it is almost impossible to get graphics cards without paying a very high extra cost.

READ ALSO: How to Overclock an AMD Processor

So after this summary of advantages and disadvantages, let’s see what is more powerful. In the end, we want to see if the difference is worth it, or if they meet our requirements.

So we’ve decided to pit the two systems against each other, and we’re going to compare the graphics power of a laptop against that of a tower with the same components.

You will see that the graphics cards are of Nvidia’s pascal architecture, they are not RTX 3000, but it is simply because we are not reviewing an element as such, but rather seeing what differences there are between laptop and tower.

The processor is older, specifically from 2014, but as you will see, it is a processor that today continues to perform perfectly in games such as a 9,400 or even a Ryzen 3,600.

So the only difference in this case is that in games that have a little more load on the processor, we will have fewer cores. So maybe it affects us a bit more, but we make up for it with higher turbo speeds than on the laptop .

Since here we reach 4 gigahertz of turbo and in the laptop we will be at 2.2 gigahertz, almost all the time, because the turbo is practically unattainable due to temperatures

The laptop is also somewhat more benefited by having more and better RAM, but for this reason we are going to try to eliminate this type of variable in the different games to put the two graphics cards side by side to see which one performs better.

Tests Benchmarks between laptop and tower

We are going to start with a synthetic test such as FurMark , a test that our graphics cards make the most of and, incidentally, gives us a score based on the FPS we achieve.

What we will do is without touching any type of overclock configuration profile, leaving everything as it came from the factory. We get a score of 4,463 points for the 1060 desktop and 4,843 points for the 1070 laptop .

In the laptop we can try to overclock, but it will not be very useful since the limitations that exist due to temperatures and power supply do not allow us to pass more voltage to the graphics card, since it could not maintain it.

On the contrary, in the 1060 we can use MSI Afterburner to overclock by letting a higher voltage pass and get both the core clock and the memory frequency up.

As a result, the 1060 now outperforms the laptop’s 1070 by a single fps at most, and we’ve gained 8 fps on average completely freely, safely, and on top of that temperatures are still maxing out at 58 degrees.

Let’s see how it translates into a video game. We will start with a Gears of War test , where we see how on the laptop we get an average of 49 fps in images compared to 70.3 on the tower .

We’re getting a 30% improvement on the desktop 1060 versus the laptop 1070 . Even so, on the laptop we activate the gaming mode that allows a little more voltage but increases temperatures, we managed to increase that rate from 49 to 58 frames.

But once we do this, we will see how, due to the temperatures, we start to suffer some bottleneck at a very low rate.

As we have already seen, a laptop graphics card is not exactly as powerful as a tower one. But even so, it is not so, honestly. We expected the 1060 to be quite superior , but after this we see that it is not.

This is thanks to the greater number of transistors, since in the 1070 we have 7.2 billion compared to 4.4 billion. We almost double.

It should also be added that surely in another laptop, if we have this same 1070, it is probably much higher if it is much better cooled, since in this Razer Blade 15 laptop the cooling is not the best .

The 1070 Max-Q has a computing power of 5.65 teraflops, compared to 437 teraflops of the 1060. This is why it is very important to have good cooling to get the most juice out of the graphics cards.

We already know that when buying a gaming laptop, we pay more for the mere fact of being a laptop. But it is very likely that it is because we need it, since laptops have something superior and that is their mobility.

Instead, in a tower, we need a keyboard, mouse, and also a screen, not to mention that the laptop can be used without being connected to the power.

Yes, if we are not connected to the laptop, it will be even more limited in terms of performance since the battery cannot handle the energy required for tasks that are heavier.

But still they have the advantage that we can use it anywhere . I really don’t think one is superior to another, but they are used for different cases. They are not made to compete with each other, but to cover each different needs.

At the end of the day, the thing to keep in mind is that when we want to buy a laptop, we have to make sure to look for reviews of that particular model .

Bluetooth Speaker: How to Choose?