Holoride means taking a step forward towards that hugely popular phygital philosophy, sometimes as a concept to show something that might seem an exercise in pure style, others as a natural progression of a trend today that maybe only geeks, tomorrow ready to be mass.

The context is the context of Futureshots ’22, the event organized by H-Farm that was born as an incubator for startups, evolved as a consultancy and is today (also) a university campus that embraces students of all ages, from the young in the university not to forget the postgraduate masters.

The model is the American one: a campus with dormitories and services, plenty of open space, sports, leisure and training facilities based on new technologies, and digital and always present practices, in order to get people to connect with students instantly with companies that are always on the lookout for new talent. 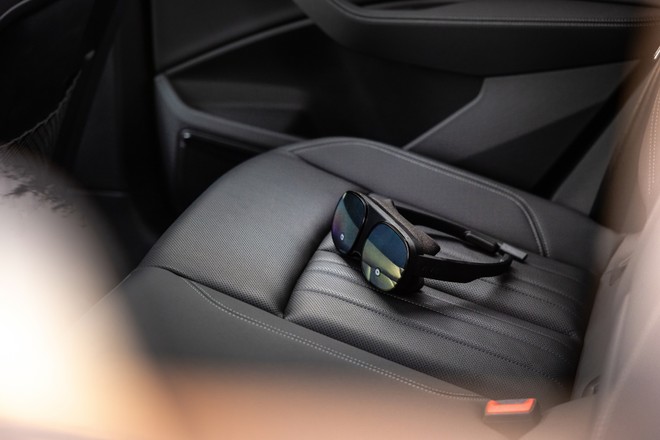 Born as a spin-off of Audi and located in Munich, the company brings together the worlds of automobile, gaming, coding and technology, with a particular focus on Virtual reality and immersive experiences.

It might seem counterintuitive to associate virtual reality with a car because both are likely to make you feel sick: statisticallyIn fact, 30% of people suffer from motion sickness; About a third begin to feel the first symptoms already 5/10 minutes after they start typing on a mobile phone from a moving car or reading something on the screen.

Virtual reality isn’t digestible for everyone, and it’s a matter of preparation. Precisely for this reason, imagining virtual reality in a car can be a silly thing, in fact testing Holoride technology showed that You can enjoy virtual reality experiences without the effects of car movement. 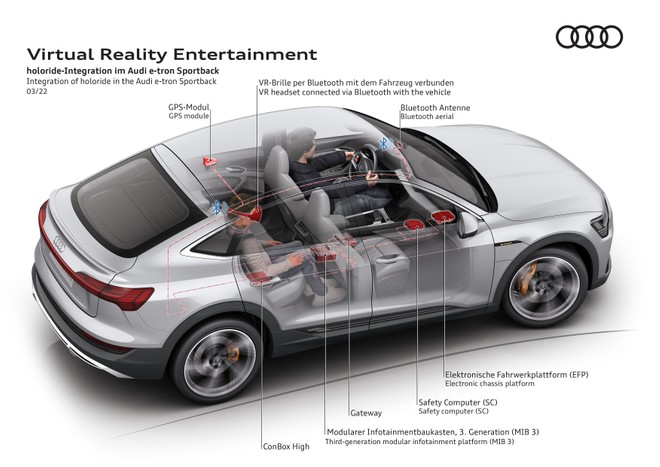 Holoride is a virtual reality platform that always knows where and in what context you are traveling and anticipates “future moves”. Positioning is synchronized using map data, GPS location, vehicle sensors, and VR viewer devices. By integrating all this data, e Create a virtual environment “moving” with the carVirtual reality transforms from a traumatic experience to something that feels natural.

On the hardware side are the sensors, and on the software side, a lot of work is also done by those who design the interface and games. While watching a trailer on Netflix, oh my god small bright spots In the background, not very invasive, They remind me of speed synchronous with the car. virtual platform In the middle, a small lookout point with a “fence” separating me from the virtual void, Become my reference point.

This little balcony It moves a little and rolls by repeating my body’s reactions, and in doing so helps me not to get confused as I focus my gaze on the fixed point of the virtual cinema. The sense of motion sickness increases the more we focus on an area that attracts attention (which is why reading something makes us feel bad before consulting a map for example), but My peripheral vision focuses on where my virtual foot reststhe “porch” that acts as a fulcrum and that appears to rest on a hinge capable of ensuring a certain freedom of interaction with the movements of the car.

The fact that this system is described as a mechanical thing, which gives you the feeling of mounting on a large ball bearing with hydraulic piston controls, should make you understand how well developed this software is really capable of bringing the typical sensations of reality into the virtual world.

Holoride uses a compact and lightweight (200g) HTC Vive Flow VR headset that connects to the car using Bluetooth technology for sensor integration. The only cable is the one that plugs into a very classic power bank to extend the range of autonomy.

Holoride has worked on localizing vehicles, for integration with manufacturer sensors, and on an SDK that becomes an integrated package made available to the B2B world, for content developers who then create virtual experiences, from entertainment and video games. 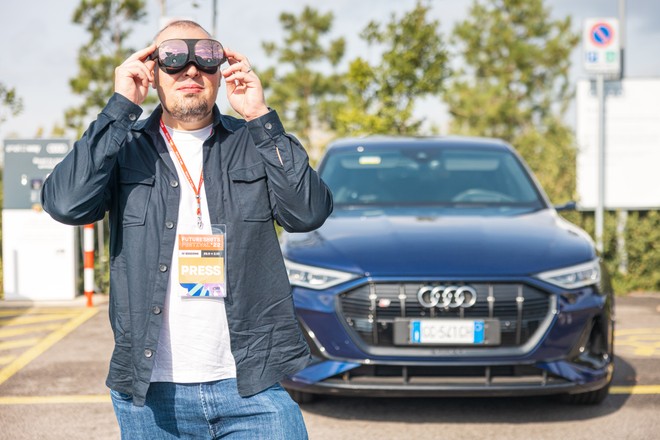 After watching a trailer on Netflix, where the head controls the movements and the button on the panel allows you to refocus the show, go to Very simple first game: A cannon to shoot colorful bubbles that only explode if hit by a bullet of the same shade.

Here is the platform by (Porch”), also used to create an anchor in navigation menus, Follow me into the video gamemoves with the movements of the vehicle, restoring the visual sense equivalent to pitch and rolling and completely avoiding “motion sickness”.

The third game is the most challenging because It frees me from that psychological security of anchoring “on the ground” It takes me as a flying robot and fights various enemies in the clouds. Some stacked stones are floating here and there to create reference points, and the head is forced to make many moves because the opponents are coming from more directions and more quickly… Plus being able to hit me with the risk of the game (unlike the previous game where there were no enemies but negative things). 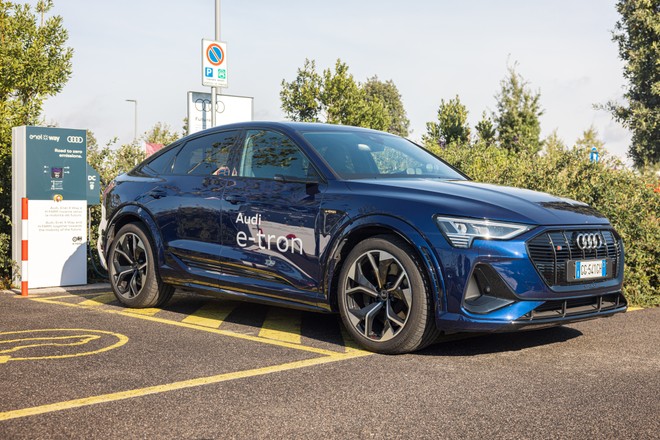 So I ask the driver to speed up, not for speeding (that wouldn’t make sense), but to make some curves and rounds in a way similar to what would happen in real life, with drivers not as flexible and attentive as it is for passenger comfort. So the curves and turns start to look a lot more noticeable in terms of turns, unfortunately still low because we’re in a more advanced than average car (I wanted to try it on a big car with less gentle suspension).

I keep playing, and now I’ve been in virtual reality for twenty minutes and there motion sickness He shows no signs of hearing you. My test session ended soon after, and I got out of the car with a slight sense of alienation passing by after a few moments. A conversation with the team, in which I found out that the debut in Italy will be in the first quarter of 2023 and this development will continue with new functions and improvements, the fresh air of a sweet Saturday brings me completely back on the right track.

Obviously, it won’t be like that for everyone: it depends on how strong your stomach is, how well you use virtual reality and a whole series of other factors, including readiness. What is certain, however, is that the work done by the development team is really excellent: as a passenger, reading an article or checking and replying to emails quickly leaves me sweating cold due to the lack of positive sensations in my stomach. However, with Holoride’s virtual reality, the 20-minute trial had no consequences. It would mean something, wouldn’t it? 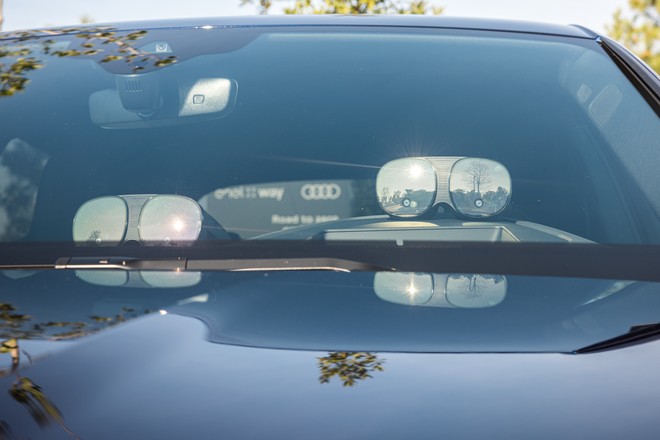 Holoride is an ongoing project: although it is commercially ready, the launch will take place in a few months also in Italy, and the ecosystem will gradually be enriched with services and applications that will also exploit RIDE, the token launched in November 2021 after years of preparation: A blockchain-based, carbon-negative, scalable infrastructure enabling services to be built around the Holoride platform. This is the first token dedicated to virtual reality experiences on the go. It accompanies the Motorverse, a kind of social experience dedicated to introducing the metaverse inside cars.

With Holoride SDK, it will be the first dedicated software for entertainment and education through gamification and to “Full concentration of the mind‘, which translates consciously but draws more on the field of relaxation and meditation. For productivity, on the other hand, we have to wait a bit: Reading and writing from a moving car is not easy and developers will have to find the right box to enable more complex functions than a simple business video call, all with a control method that can provide more complex input than simple tip and click.

Anyway, for those who really want to try it out, the system allows you to mirror your smartphone, and with a little practice it won’t be difficult to type blindly on the touchscreen and project the big screen onto the viewer…

iPhone SE 4 looks at the iPhone XR design: there will be a notch