2022 saw a change of gears for the urban mobility electric marketand in particular for electric scooters, given that in the first eight months of the year there was a noticeable growth, with an increase of 69.3% over 2021 and 11,953 vehicles in the market, driven by scooters at +77.5% and 7,043 units.

There seems to be a shift, and it’s a phenomenon worth investigating. I tried to put myself in the shoes of an electric scooter for ten days, aboard the Askoll NGS3, to understand the pros and cons of the electric transmission of this type of vehicle. Here’s how it went!

I come from a Liberty 125 with a heat engine that has been with me for several years, both when I was living and working in Lecco Lake and now in Milan. Since my office is already across town, The distance is more or less the same, even if the travel time the same kilometers increase a lot, At least during the day, due to the large number of traffic lights scattered on the city streets.

However, the plus side is that there is something to stop at traffic lights and the typical slowdown of cities can cherish, if not in terms of time at least in terms of energy. I’m talking about electric cars, ones One of the distinguishing features is the possibility of energy recovery thanks to regenerative braking Thus recharging the batteries a little.

This is also the case with the scooter that accompanied me on my electric adventure, the 2022 Askoll NGS3. The most powerful range of NGS created in collaboration with ItalDesign, In the current year’s updated version, it introduces some new features such as oversized wheels, New screen, new colors and new graphics.

The aesthetic is more traditional than the “slender” models of the EVO line, but it retains the modern and basic lines to which it adds more protective armor, while the offerings are more aggressive. The 2700W brushless electric motor allows you to reach a top speed of 66 km/h It promises an average range of 87 km; This aspect depends a lot on how you use it, but I’ll talk about it later.

to feed him Two packs of lithium-ion batteries with a total capacity of 2,800 watts, each weighing 7.6 kg. The braking system has CBS for added safety in all conditions of use, and I especially appreciated the lime green disc brakes unlike the rest of the body. In the new design, the rims are equipped with tires of 90/80 – 16 inches in front and 110/10 – 16 inches in the rear.

The build quality is very good, I have to say that This Askoll proved to be very stable and had good grip in cornering. The weight is well distributed – we’re talking about 73 kg without batteries – even with the top case, and the high wheels make it a snap in the middle of city traffic.

The bell that shows our presence to other road users, In compliance with the new rules of the Highway Code, it activates only when moving at low speed and in the rear and I did not find it annoying; At best, it sparked some curiosity in the other scooter riders stopping at traffic lights.

The two-seat saddle is well padded and comfortable, you can carry a passenger who will benefit from the very firm, removable pedals; From behind the saddle they told me the shock absorbers are very stiff. The new multicolor backlit digital display has seen a reorganization of the information making it more readable, and speaking of smart stuff, there is also a dedicated app called Askoll Smart Drive; Very useful for displaying usage metrics and paths.

There are three modes of use: eco, normal and powerful, which regulates the vehicle’s speed and thus residual autonomy. In city traffic I prefer to be able to count on a bit more shine to be able to get out of the way when crowded situations arise or to be able to overtake quietly, so I mainly used power mode, which goes to a maximum speed of 66 km/h I have a normal speed that stops at 50 km / h.

only in cases of necessity, When I wanted to get the most out of the remaining range, I tried the eco mode which allows you to go to the limit at 30 km/h And I must say the experience wasn’t bad, but above all it did what it had to do: bring me and my rider to the destination, with a few miles of independence.

Performance is in line with what I’ve come to expect, just under a 100-displacement scooter with an afterburner. Not the brightest at traffic lights, but The available force is all that is needed to move around the city with some boost when needed Thanks to the power mode. The driving experience is that typical of electric scooters, very quiet, with all the power immediately available and a good dose of technology needed to manage the modes and remaining range. Energy recovery can also be modified in two forms, more or less intense.

In about ten days – including two when I didn’t use it – I traveled about 22 kilometers a day for a total distance of 170 kilometers, and to do so it took less than 3 recharges, which is the first in the shop. So, I left on Monday and recharged it Thursday evening out of safety, even though I still got 20% off. My daily mileage is pretty high for a city scooter and I didn’t skimp on power, so I would say that with normal use it can easily be charged every 5 days without autonomy worries.

The batteries are removable, so two alternatives to recharging can be chosen: Either you recharge it directly in a garage, or in any case near an outlet, leaving the batteries in place, or you can remove them from the scooter and take them to recharge somewhere else, for example at home or in the office; For example, you can ask your employer if there is such a possibility. 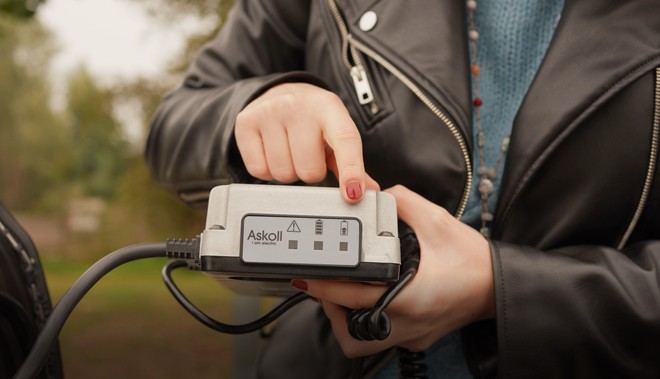 ability to choose, Between the two options the first option is definitely more comfortable, Because just plug the Shucko plug into the socket and you’re done; In the second case, you will instead have to carry three items (the two batteries, each with its handle, and the power supply) into the socket and charge them separately; It takes about 3 hours to fully charge each one, so it is better not to completely discharge them, which, moreover, is not always recommended with electric cars.

The weight of the batteries can be controlled for me even if not walking, but the speech changes according to the structure; However, the ideal option would be to transport them over short distances (and in my case, by elevator). The charger indicates when the batteries are fully charged But not the average levels of charge, which would have been useful instead because it is important that they both have more or less the same level of charge.

Storage space for your items inside the car is objectively small, as is often the case with electric scooters, because most of the lower seats are occupied by batteries; There is a grid under the seat that allows you to keep some documents and a little space is saved if you decide to leave the power supply at home, which is only needed when recharging.

for this reason I would have appreciated that perhaps, with the wide enough armor, a glove compartment was also provided Inside, while it was obviously chosen for the time being to give as much legroom as possible for drivers, or for their parcels and shopping bags, since the floor is so big.

Of course it won’t fit a helmet in any way, and that’s why The upper case was a very useful addition, In addition to the smartphone holder that also comes with a rain cover I found myself good with, which is mounted on the left side of the handlebar also allows you to plug the smartphone into the USB-A socket for charging.

Speaking of shopping packages, One of the things I really appreciate is that there are two hooks, one under the saddle and one in the classic position behind the shield, to secure your bags. Very comfortable, the bag under the saddle is perfect for hanging a backpack and I’ve used it a lot.

How convenient is it? 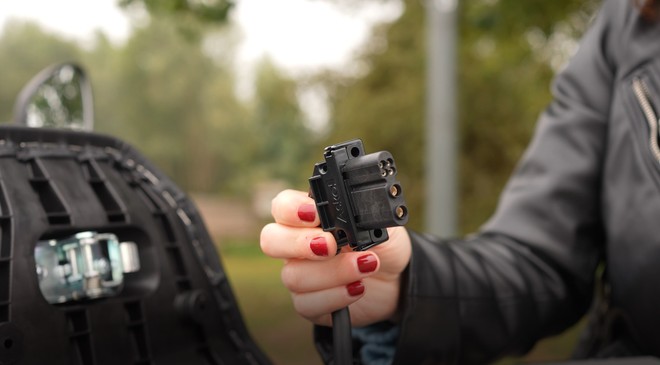 Certainly in the balance of this experience as an electric bike there are many positives: In addition to those I have explained up here, the thing that is worth the whole experience to me is the silence in which one travels. One really gets the impression that it has less impact on the environment, not only for locally zero emissions but also from an acoustic point of view, so much so that the comparison with heat-sucking scooters makes them look noisy and smog friendly which contributes to the output.

From an economic point of view, let’s do the math: Certainly there has been an increase in the cost of electricity, but this obviously depends on its source (for example, if you have a PV system, the question will probably be different).

However, traveling 170 km took about 18 hours of charging with Shucko, then For example, if you spend 0.28 cents per kilowatt-hour, ten days of electricity will cost less than 5 euros. The price of gasoline has also gone up, based on today’s price of 1.65 euros per liter, with a 125 scooter, assuming a consumption of 30 km / liter, I would have spent almost 10 euros, to which the maintenance costs should be added. Other expenses related to the internal combustion engine. 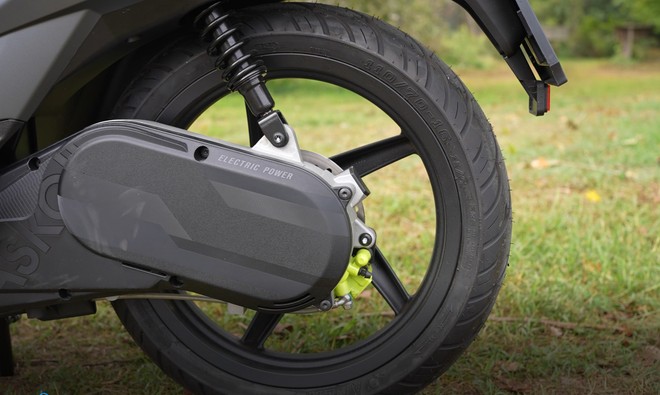 This is the most variable factor as it depends on the scooter chosen. The NGS3 I used is available in three colors: mat titanium, gold, ocean blue, coast list €4790. However, the number decreases if we take into account the bonuses that are applied at the state and local level: for example, if you are a resident of the municipality of Milan, you have access, in addition to the state environmental bonus, to one intended for residents. In this case the price is 1,829 euros with scrap or 3,312 euros without scrapping.

also After-sales assistance and warranty depends on the company you contact: In the case of Askol, there is a three-year warranty on the entire car, excluding parts subject to normal wear, and in Italy, between dealers and service centers, you can count on 200 points of contact in case of need, and the closing times are always less than about two days.

And you, have you tried an electric scooter before? How did you find yourself where you live? Tell us in the comments, along with your impressions of the electric experience.

Studio Display Pro, a new delay: arriving at the beginning of 2023 | Common

Logitech G and Herman Miller with Vantum, the ultra gaming chair from 1300 euros!