In the first six months of 2022, digital payments in Italy It is worth 182 billion euros, growing by +22% over the same period in 2021 and aiming to reach a value between 390 and 405 billion and representing more than 40% of total spending by Italians, getting closer and closer to cash (now below the 50% threshold). These are some of the evidence that emerged from the semi-annual edition of the Innovative Payments Observatory of the School of Management at Politecnico di Milano, presented on the occasion of the webinar “Digital payments in Italy in the first six months of 2022”.

Credit should also be given to the state’s cash back if there is a recovery in consumption and digital payments in the first half of 2021 that will allow Italy, according to ECB data, to investigate One of the highest growth rates for electronic transactions in Europe (+41% vs average +18%). The eventual halt to cashback has not had strong repercussions on the growth of digital payments which, according to Valeria Portali, director of the Innovative Payments Observatory, was in any case in line with the post-pandemic trajectory.

As the number of transactions grew, but in a way more contained than in the deal, as their number reached 3.8 billion (+19% compared to mid-2021). This, the portal adds, because the first half of 2021 saw significant growth in low-value transactions thanks to cashback: the current average receipt, equal to 47.5 euros, is actually lower than June 2021 (46.4 euros), but at any Definitely lower case than the €52 average in the first half of 2020 (when cashback procedures were not yet fully operational).”

Push boom with smartphone and smartwatch

The observatory also noted the growth of prepaid card transactions (an increase of 19 percent) and debit cards by more than 24 percent. As for credit cards, after 2021 growth is still very limited due to the medium-term effects of the virus, thanks to the recovery of high-value consumption of services, tourism and corporate travel, there was an increase of +21%. Albeit to a lesser degree, we are talking about 14% of operations ATM cash withdrawal It grew to a total of 85 billion euros.

The contactless card itself has confirmed as the preferred method of payments in stores with 64% of the total digital transactions which rise to 69% if also taken into account via mobile phone, smartwatch and other NFC devices. The largest growth ever recorded Smartphone and smartwatch payments by +139% in the last 12 months, Its value reached 6 billion euros in the first half of 2022 alone. Almost 90% of it is based on contactless NFC technology, and the rest is the privilege of applications based on other technologies (such as QR code or geolocation) which account for about 24% of the number of transactions. 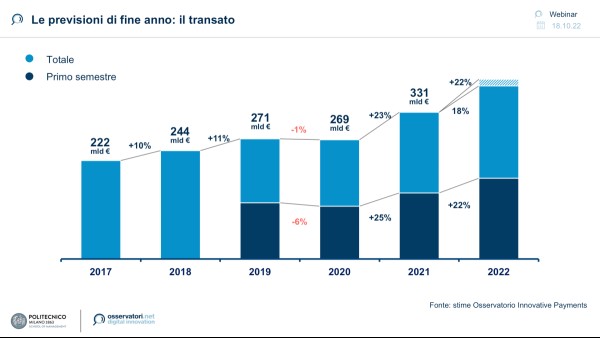 According to the study, by the end of 2022, transit growth will be confirmed higher than the previous growth of the virus (ie +10.8% recorded between 2016 and 2019), with predictable forecasts. Increased penetration of digital payments For cash that could raise the value of the digital transaction at the end of the year between 390 and 405 billion euros. As noted earlier, growth is likely to be driven by payments via smartphones and wearables, expected to be worth between 14.5 and 15.5 billion euros at the end of the year (more than double the 2021 deal, which stood at 7 billion).

Matteo Rizzi, a researcher at the Observatory of Innovative Payments, concluded that digital payments will also help by introducing penalties associated with point-of-sale commitment that can break down consumers’ psychological barriers in deciding whether or not to use electronic payment. If the growth in consumption is similar to the growth in the first half, then electronic payments may exceed the 40% share of total spending by Italians.

Motorola launched: RAZR 2022 arrives in Europe, in 2023 it will double