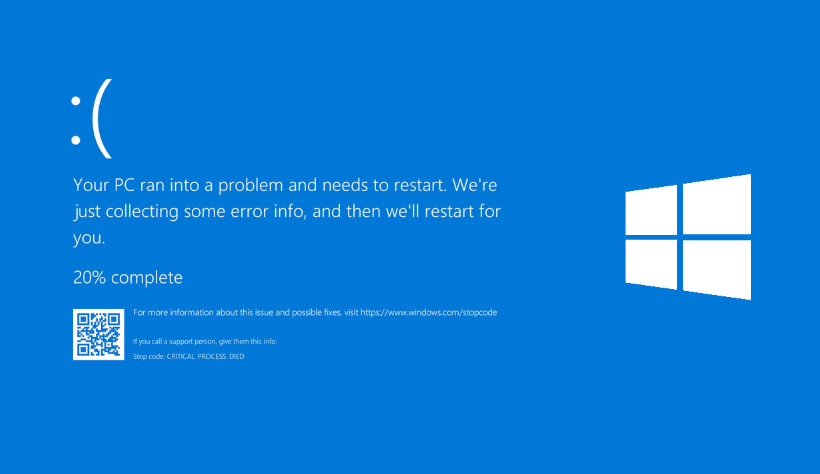 Did you get a Blue Screen or the popular blue screen name on Windows 10? In this article you may find the cause and the solution.

Blue Screen or blue screen of death (or BSOD) is technically a fatal error, which occurs when the Windows operating system encounters an error and is forced to shut down completely.

Usually after a Blue Screen, the system restarts. This way of dealing with errors is found in all Windows operating systems such as: Windows 95, Windows 98, Windows XP, Windows Vista, Windows 7, Windows 8 and Windows 10.

In this article we discuss Windows 10 for the most part, although some issues may be similar on Windows 8 and Windows 7.

Why is Blue Screen Annoying?

You have no choice but to restart the system. Troubleshooting the problem can be more difficult, but fortunately almost any Blue Screen includes an error code that can be used to determine the cause of the problem.

The most common Blue Screen errors in Windows 10

Below, we take a look at the most common Blue Screen or Windows screen errors in Windows 10 and possible easy fixes. Please note that some errors can be fixed by software – reinstalling Windows, updating the driver or removing a problematic software / program, but there are cases where RAM or Hard Disk (or other components) cause the errors.

When you get a Blue Screen error, look for the error mentioned in the Stop Code below and you will also find potential repairs. Troubleshooting Blue Screen errors can sometimes be very easy (upgrading a driver) and sometimes very annoying or even costly – problems with a hard drive or RAM.

Memory management is the process of managing how memory is used in your computer or laptop.

It keeps track of every byte in memory and if it is used freely. Decides how much memory should be allocated to each program and when – it also frees up memory when we close a program.

Troubled RAM – try to test the memory with a program like Memtest or remove a memory stick from the system and see if you still get the error;

Hard disk errors or more serious problems with it. It is worth doing an error scan;

Here are the possible causes and fixes for KERNEL_APC_PENDING_DURING_EXIT:

If you overclock or have an overclock active, reset everything to default or reduce overclocking;

most common: if you just installed a driver – or recently updated it, try another driver for your video card / chipset / sound card;

problem in the Windows Registry – a quick fix would be System Restore or a Windows 10 reset;

scans partition C for Malware / viruses. A virus may have affected an important Windows installation file;

In the worst case, the error may come from a troubled HDD or a faulty memory stick. You can scan the hard disk with HDtune and the memory with Memtest;

This blue screen error is most often caused by problems with the operating system registry or incorrect system settings.

The easiest way is to fix such an error by repairing the installation with either a Windows 10 disk or a Windows system reset. There are also programs that claim to fix such errors, but often give it away or are in vain.

This error most often arises from voltage problems. If you overclock try to reduce overclocking or test without. If you have had a power outage or have an old / no-name source, it may be your fault.

This error also occurs when components other than the source are defective, but also from driver compatibility issues or heat issues.

I recommend that you scan your hard drive, RAM, scan for viruses / malware, run some heavy processor or video card testing programs, and ultimately try another source. If after trying another source everything is ok and you want a new one, get a certified 80 PLUS Gold to make sure it holds you. Here’s what these certifications mean .

You can also try resetting Windows 10, keeping the files. But most of the time I came across this error in sources.

It basically tells you that a process that went into memory failed to be removed and caused problems.

Common: Do you have an anti-virus or anti-malware solution installed? Did you install a recent one? It may be his fault. Try another similar program;

if you recently did a driver update, try another driver version for that device;

RAM may have problems – scan with MemTest;

In most cases, a wrong, corrupt, or bad driver causes the error. Check and update (to a newer or older version if you already have the latest version) drivers. Not with driver and manual update programs from the manufacturer!

Drivers to check: video card, audio card, network card, wireless network card and any other driver comes to mind, in that order preferably.

Other possible causes of the error:

The operating system has an error, tries to scan for malware / viruses or resets Windows 10;

a bad on the hard drive – scan it for errors with HDtune;

I recently came across this bluescreen. In my case, it was from the free version of Bit Defender antivirus. Yes. After uninstalling, I had no problems. But this error can also be caused by other causes. See below.

Other possible causes of the error:

Note: in my case, the gzflt.sys file was also marked in bluescreen, so I realized that Bit Defender is to blame. If you also mentioned gzflt.sys, and you have an antivirus solution or even Bit Defender is clear.

The video card usually causes this error. Many times AMD video cards and their drivers are to blame, but you are not exempt even if you have an Nvidia video card.

Being a common error on video cards, it is an extremely frustrating problem for gamers – the error sometimes appears fixed when playing or playing multimedia content.

This error is often fixed quickly in two steps:

Update the video card driver from the source (from Nvidia, AMD or Intel for integrated video cards).

If you have a desktop, check the radiator and fan of the video card for dust – give it a quick breath if it has any deposits.

What do I do if I find an error on my hard disk or RAM?

Even if there are methods to repair a Bad on a hard drive or other… I always recommend you to choose the safest route: buy a new hard drive (or why not an SSD? They have dropped a lot in price – to ~ 300 lei you find a good 500 GB SSD ) and new memory.

The safest way to get rid of a lot of problems is to always buy new RAM and HDDs. These can cause a lot of problems when they start saying the word ‘old age’. It’s not worth the little money you save by taking an HDD SH for the stress.

If you suspect a driver is giving Blue Screen, one way to find out more quickly if you are right is to boot Windows 10 into Safe Mode.

If in Safe mode it does not give Blue Screen, chances are it is from the driver or a program error. Why? Drivers are not loaded in Safe Mode. The lack of Blue Screen error in Safe Mode gives you an extra hint.

As you enter in Safe Mode in Windows 10?

Here are the official instructions from Microsoft.

Once in safe mode, try to do what you did when Windows gave Windows Screen. If you are unable to receive the Blue Screen, there is a good chance that the problem is with a driver / program.

Didn’t find your error? Leave a comment! I will add it to help others fix probably the most frustrating problem on Windows.

If the article helped you, give it a share or tell a friend about it. He can also get rid of problems with Blue Screen or Blue Screen in Windows 10🙂

If you found this article interesting, find out in the article here and how to find which processor, video card, motherboard and RAM models you have in your system (be it laptop or desktop pc). Or how to free up space on your Windows partition , usually partition C.

Why should you start using SEO Yesterday?