The challenge between the Audi RS 6 Avant and the Audi RS e-Tron GT is one of those impossible challenges, yet the two cars share many characteristics, starting with 0-100 km/h they both arrive less than 4 seconds.

The first is the family station, even if this term is not confused with “boring car”. The RS 6 Avant is actually a wagon with proportions that’s hard to match because it’s powered by a 4.0-liter V8 petrol engine, twin-turbo TFSI engine producing 600 hp and 800 Nm of torque. The result? 0-100 in 3.6 seconds, 0-200 in 12 secondsTop speed of 305 km/h (must be opened with a specific package), we’ll see later, great handling given the type of car.

To give you an idea of ​​the performance of these two beasts, in less than the time the Dacia Duster accelerates from 0 to 100, they have gone from 0 to 200 km/h… 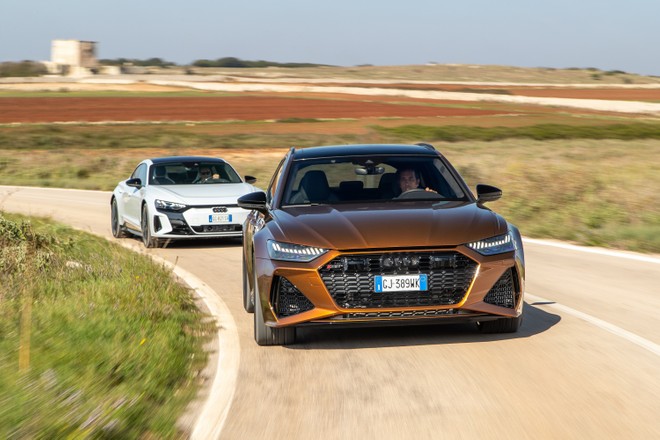 Apulia, sun, heat. We are in the province of Lecce and the test routes stretch along the sea, offering an ideal scenario for testing two main RS vehicles: there is no shortage of curves, some are blind and narrow, others are wider. Ups and downs, excellent opportunities to test the promised improvements in the RS 6’s turbo lag reset or the e-Tron GT’s instant torque, on the other hand, brake performance that hits the carbon-ceramic system from purchase as an option (here it was).

So I start from RS 6 Avant, a wolf in sheep’s clothing Because just sitting behind the wheel makes us instantly forget the looks of its vehicle to bring back the driving sensations of a real sports car. The engine roars and after a short warm-up it is time to increase the speed. The electric sense of instant torque is missing, but the V8 biturbo engine runs without the power holes, with absolutely brutal linear coupling and accompanied by a precision-blade gearbox, and very fun to activate with paddles on steer that throws the wheel, one by one, all gears without (almost) ) Waiting moment.

You hit the braking and the carbon-ceramic brings back the feel of real motorsport, a feeling of attack that is instantly identifiable and can intimidate those unfamiliar with it, which is exactly why both RS models are sold as standard with a conventional system. The “noble” customer, who will never see the track, prefers to find a classic, softer attack that increases yield with increased pressure, and in fact is not entirely wrong if we are talking about a car that must also be driven daily. 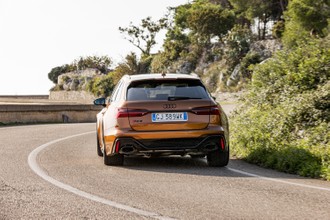 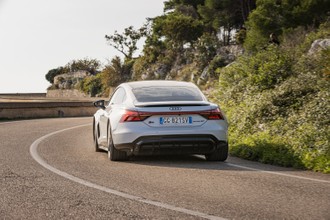 Enter the curve and the magic happens. Here the RS 6 Avant doesn’t make its long tail aware at all, the advantage is the steering integrated with the rear that shortens or lengthens the virtual wheelbase depending on the situation. The quattro drive is permanent all-wheel drive with a mechanical self-locking differential that operates in a 40:60 ratio but is able to shift torque to a maximum of 70% at the front or 85% at the rear. Added to this is the sporty rear differential, which distributes torque between the two wheels of the same axle.

The result is delayed electronic control interference and cornering on lanes that create an impressive feel and return safety even when facing the tight curves of cliff-side roads. Enter the adaptive air suspension, which is standard on the Avant, and you’ve got a really nice package for most needs, but you can improve it even further with the RS plus setup.

In this case, you will also have Dynamic Ride Control with steel springs and automatic roll and tilt compensation (the RS e-tron GT with three-chamber air pressure includes this feature as standard).

So I switched to the e-tron GT With the sound of eight cylinders in the ears. To compensate for the lack of electrical noise, Audi has developed a Notable default sound, but it doesn’t quite live up to that of a V8 engine by RS 6 Avant. So I’m starting to regret the pepper wagon concert, but after a few kilometers I’ve already forgotten it, and my brain adjusts to the electric drive and instant torque that makes the RS6’s acceleration pale.

Stronger, more powerful, instantly ready. That’s the first feel, reminding us that if, in terms of delivery, the e-tron gives it all right away, the RS 6 Avant shows nice behavior even in stretch. The second difference has to do with the way the shot is executed: a wagon change is lightning, but nothing beats a direct connection of electricity that doesn’t have to deal with even those thousandths of seconds of waiting between shifts. else.

Both are glued to the floor, and the e-tron has a massive 93 kWh battery to lower the center of gravity and defend itself well in the narrow edges of sea-view hairpin bends without making the kilograms of difference feel like much: 2,150 kg for the wagon with V8 and 2,420 electric coupe with two synchronous permanent magnets. 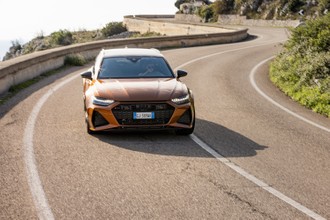 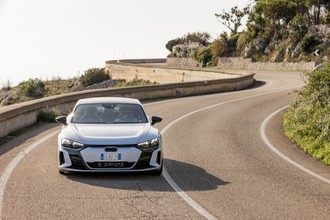 Both are elephants, we are a long way from the concept of sport associated with the agility typical of an entire category of compact games, but it is about Curse of nimble and snappy elephants that respond to specific needs, ie those who seek Superior performance without sacrificing comfort (also in terms of sound insulation), Technology and habitability. To be clear, the philosophy is the opposite of that of cars like the MX-5, but it’s not necessarily wrong about this.

Regardless of your idea of ​​a sports car, the e-tron GT also handles the curves with utmost safety and stability thanks to the all-wheel drive system, which is here provided by two electric motors and thus faster in adapting the torque distribution. Since everything happens digitally, without the passage of actuators that translate the input of the sensor into a command for mechanics. On the other hand, there is no mechanical rear differential, the e-tron uses the now-tested torque vectoring via electronic locking.

Gasoline or electric? Who won? 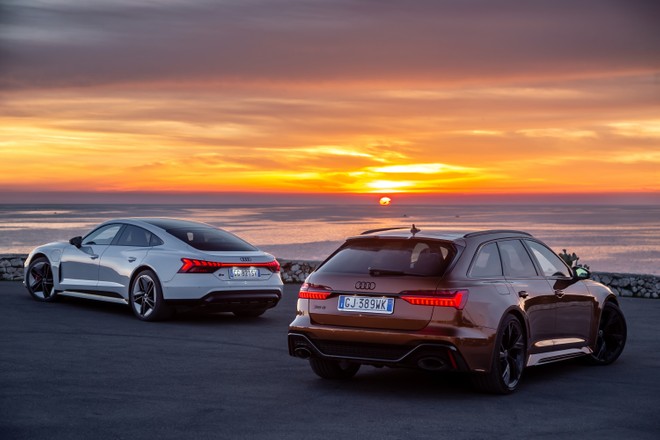 Who wins and who loses? Here it depends on you because when it comes to cars, football and politics, prejudices are so strong that they show no cause. We eliminate any consideration of recharging, assuming that both do not cause refueling problems, regardless of whether it is gasoline or electric.

Once that’s done, we can spend hours a Find the definition of sport for a car, however, without taking into account that any definition is a child of the times, and therefore cannot be universal, whatever the extremists say. So back to the introduction, I remind you that my brain has been wired to associate the smell of batter and tires with the positive sensations, those of karting competitions. However, time has also made me appreciate electric driving and that feeling of being in a video game of the future, today’s present, in Wipeout, where extremely powerful electric motors smoothly unload a couple of savages, shooting me as if they were launched from a slingshot.

Ironically Find no delay she was obsessed And consistent on the part of the manufacturers, the latest development of the RS 6 Avant with its twin turbo shows this, but when a technology capable of completely eliminating any delivery delays arrived on the market, criticism spread as it did during the monsoon season. 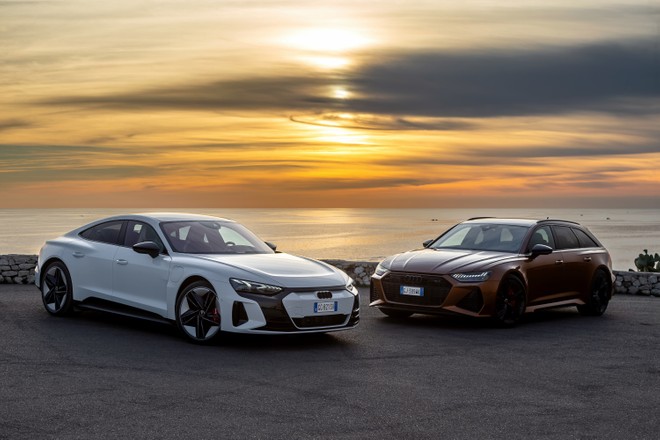 Because? simple, why It is the first time that the automotive world has undergone an important transition, in a period when two generations collided and where the ancients have a history behind them consisting of more than a hundred years of automobile development. Hard to cancel with a patch, it’s a pleasure to activate a lightning fast (but not instant) change like the German cart change. It’s hard to get used to a futuristic hiss instead of the sound of an open exhaust. It’s also hard to let go of this dose, albeit insignificant in high-end cars like the RS 6, of vibrations.

It is not easy to determine the best of the two, but it can be said with certainty that the technology has won in both cases. The fact that it can now drive more than two tons in a sporty fashion has won thanks to the advanced suspension, all-wheel steering, increasingly improved chassis, ultra-fast electronics and the tractors torque engines. What wins is the fact that today you can have the space and comfort of the family, but at the same time, a button turns the car into a vehicle that you don’t mind a few swipes on the track, even if it’s not a racing car. And that’s what they both pass on to the lucky ones who can afford them, a versatility that can change faces if necessary and make us spend time in the car well, whether with a smile in the curves or relaxing on the highway.